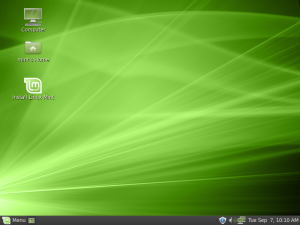 First thing I noticed, the installer is not the one used by Ubuntu. Not a problem. However, it only runs in English (though you can make the installation itself in any language available). That was a surprise, since the particular installer had been translated in Greek just a few days before, in Launchpad (I should know, I did the translation ;)).

The installer is not so intuitive and user-friendly as the one used in the main Mint version. There also seems to be some issue with partitioning and formatting… I tried the installation four or five times… The first time I double clicked on the partition name, in the installation window, and that brought up gparted (partition editor). With gparted I resized the usb hard drive‘s NTFS filesystem and created the root, swap and home partitions. However, the installation halted while trying to format the swap partition (for the second time, because I accidentally had checked the option in the installer’s main window after closing gparted).

The second time, the swap partition was already formatted, so I skipped that step. But then, the installation halted while trying to mount the /home partition. It would appear that this would happen systematically, if I did not choose to format /home in the main installer screen.

Bypassing that obstacle in the following attempt, I then managed to overlook the boot installer screen, and let grub install on /dev/sda… that was the laptop’s internal hdd. That also meant that the laptop would no more load directly to windows, it would dual-boot! Like I said, I did not want to temper with the laptop, so I let it dual boot and chose the “windows” option which brought up XP. Then I run the program MBRWizard 2.0, which restored the MBR.

Choosing /dev/sdc next time to install the boot-loader (remember, sdb was the install usb stick), something new came up! It would appear that after “successful” installation and rebooting, after logging in, no /home partition would be found, no folders within /home/some-user would be created, mint-menu would not load, everything would break. Using alt-F2 to start up a terminal, I found that the mount points were mixed up, because LMDE would try to find /dev/sdc, although the partition was now /dev/sdb (because the installation usb stick had been removed and there was only the laptop’s hdd and the usb hard drive, on which LMDE was installed). Looks like Debian uses static /sda and /sdb references (rather than the disk’s UUID) for partitions. I had to edit /etc/fstab manually and replace “/dev/sdc” with “/dev/sdb”. Having done that and after rebooting, everything was OK.

Feeling like testing everything, I did the installation again, this time attempting to install a Greek environment. That went smoothly, or so I thought. I chose to install in Greek and chose the Greek keyboard layout to use in the new system. In the live session though, I had both Greek and English keyboard layouts installed, so I wrote the password for the new installation in English. HA HA HA!! Big mistake! After the system rebooted, being in a Greek environment for the first log-on after installation, I could only write in Greek! But the log-on password was in English! I suppose there’s no way to prevent a loony user from getting there, unless the installer would take the initiative to install all languages available in the live session plus the ones actually chosen by the user for installation. So, off we go again… Install from scratch. At least the whole process would take only 15 minutes from start to finish.

Finally having a correct installation, I started noticing the differences. The new base, Debian, is noticeably faster than Ubuntu. However, one starts to appreciate the hard work and the value that has been added to Debian’s application availability and user friendliness, by Ubuntu and Linux Mint Main Edition. For example, I could never imagine myself trying to find out how to change the locales, in order to switch the Gnome environment from  English to Greek, and not being able to do so, without resorting to Google for help… And I really would have appreciated it if a pop-up window had come up to tell me that there were proprietary 3D drivers available for my nvidia card (and offer to activate them with one click), rather than having to do everything by hand in a terminal…

The main advantages of LMDE using Debian Testing directly as a base, instead of Ubuntu, from my own personal point of view, are Debian’s robustness, speed, responsiveness, and the fact that it is a rolling distribution; which means that it is continually updated and upgraded, without having to fresh-install the new version or upgrade the installed one, a couple times per year. On the other hand, Debian by itself is not so desktop-ready, and Linux Mint will have to do LOTS of work to get LMDE to be as smooth and complete as the main edition. In a way, it’s like trying to do what Ubuntu did, but without “a Canonical” on their side. Or so it seems…

This is a young project and I am sure it will continue to get better. Reading Linux Mint’s blog, one comes to understand that LMDE is a proof of concept kind of experiment. At the moment, it seems to be more suitable for linux-savvy users, not for complete newbies or people who just want their system to start up and be ready to go. However, it is indeed a very exciting project, and being the geek that I am, I would probably install LMDE 64bit right away on my home laptop – but so far only the 32bit version has been released…

Get root and type [code]dpkg-reconfigure locales[/code] and select the locale(s) you want to generate. At the end, you’ll be asked which one should be the default.

Nice, that took me back a few years…

What is a personal Blog?