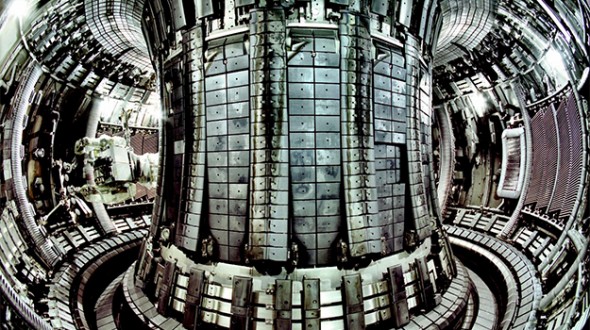 News posted on BBC about ITER (Latin for “The Way”, but also “International Thermonuclear Experimental Reactor”):

I’ll elaborate on this issue… it is my personal opinion that this project is of crucial importance to the future of mankind… after all, abundance of energy is a vital ingredient of a Post-Scarcity Economy (from WikiPedia):

Post scarcity or post-scarcity describes a hypothetical form of economy or society, often explored in science fiction, in which things such as goods, services and information are free, or practically free. This would be due to an abundance of fundamental resources (matter, energy and intelligence), in conjunction with sophisticated automated systems capable of converting raw materials into finished goods, allowing manufacturing to be as easy as duplicating software.

What would thermonuclear fusion power plants run on? Well, two Hydrogen isotopes, Deuterium and Tritium. Deuterium comes from plain sea water (therefore inexhaustible), while Tritium is produced within the reaction itself, by interaction with Lithium (a very common light metal). Future generations may run solely on Deuterium.

In fact, a fusion reaction is about four million times more energetic than a chemical reaction such as the burning of coal, oil or gas. While a 1 000 MW coal-fired power plant requires 2.7 million tons of coal per year, a fusion plant of the kind envisioned for the second half of this century will only require 250 kilos of fuel per year, half of it Deuterium, half of it Tritium.

Deuterium can be distilled from all forms of water. It is a widely available, harmless, and virtually inexhaustible resource. In every litre of seawater, for example, there are 33 milligrams of Deuterium. Deuterium is routinely produced for scientific and industrial applications.

In addition, fusion emits no pollution or greenhouse gases. Its major by-product is Helium: an inert, non-toxic gas. There is no possibility of a ‘run-away’ reaction because the conditions for fusion are precise – any alteration in these conditions and the plasma cools within seconds and the reaction stops. Fusion has the capacity to furnish large-scale quantities of energy, with a low burden of waste for future generations.

By the way, has anyone connected the dots with U.S.A.’s strategy?

On one hand, they continuously set obstacles in planning and funding the ITER (which is in the making since 1985). The first time, just when all the specs were finally in place, after the successful completion of the European JET project, Americans simply pulled the plug, by abandoning the project! It took the Europeans 20 years to come up with the needed funds, that U.S.A. had withdrawn. And in 2003, just as soon as EU did come up with the money (which meant that they could go ahead and develop the technology all by themselves), U.S.A. rejoined the project! But it did not stop there; for example, in 2008 they zeroed their participation on the budget on ITER (letter of the Under Secretary of Energy to the Director General of ITER), and so on, and so forth. This way, any development of ITER and research advancement towards materialization of thermonuclear fusion energy, has been “postponed” for well over two decades.

On the other hand, during the same period of time, U.S.A. has been busy, trying by all means to secure for themselves complete control over access to the world’s largest remaining oil reserves and distribution channels… Get the picture of the “power game”? When a foreseeable expiration date arrives for oil reserves, and fusion energy is not yet available, who’s gonna be in control?

Anyway, today’s news was the the EU is going to contribute an extra 1.4bn euros (USD 1.8bn) this year, just to make sure that the project keeps going:

Additional funds needed to construct the ITER fusion reactor will have to come from within the EU’s budget, member states have said. The French-based machine will prove the concept of harvesting energy from the fusion of hydrogen nuclei – the same process at the heart of the Sun. Iter has seen its baseline price tag rise dramatically since a consortium of nations green lit the project in 2006. The extra 1.4bn euros will cover a shortfall in building costs in 2012-13.

The Chinese seem to be getting tired of ITER postponements. They are going to invest billions into building their own version, which is supposedly going to be even bigger than ITER and it’s estimated to be ready by 2030.