It's been a few many years since I started using Linux exclusively, as a desktop OS at home. I started out with the legendary InfoMagic 5-CD set in December 1995. It included Redhat 2.5 and a version of Debian dubbed 1.0 (evidently prematurely so, resulting in the first official Debian project release to be named 1.1 instead of 1.0).

I first used Redhat, then Redhat with Enlightenment, then Mandrake (because it was Redhat with KDE), then Mandriva. I  started using KDE as soon as it came out and stayed with it, but that changed with Ubuntu. I have consistently used Ubuntu with Gnome since 2006, actively participating in user support groups and mailing lists. And then, in 2010, I switched to Linux Mint, for which I also participated in the Greek translation project for release 9, code named Isadora (based on Ubuntu 10.04).

Linux Mint uses Ubuntu's repositories as a base, but it has some unique characteristics, which make it special. MintMenu is one, the package manager and also the Control Center are a couple others… add to that the look & feel, the choice of pre-installed apps,  and the magic of the first impression you get when you boot this OS… Everything just works, and with a lot of finesse, at that! During the first half hour of use, I don't remember how many times I went "ah, at last, someone thought of that"! As an added bonus, you get a very involved and enthusiastic community of users. When you log on to the desktop, you get a pop up window with support links. One of them is on-line support. I only had to use it once, but still I was thoroughly impressed when I got a definitive reply in under 60 seconds!! Maybe it was just luck, but that sealed the deal for me…

So, this first post is going to be very simple. It's just about how to come to this starting desktop screen (click to enlarge): 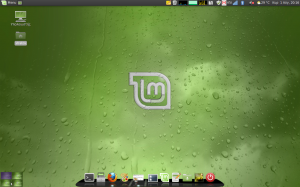 First of all, go to the Linux Mint download page and download the version that best suits your system. If your system's memory is 4gb or more, then you may be better off with the 64bit version. Otherwise, go with the 32bit one, usually it runs more smoothly. Mind you, that goes for all distributions and it has to do with 3rd party vendor 64bit support, not Linux itself. And, just to be on the safe side, run the live version on your machine, before actually installing it. That way you'll know beforehand that everything will work after installation.

You'll notice that Linux Mint only has one taskbar, on the bottom of the page, with the amazing MintMenu embedded, which is a good thing. Having only one main taskbar saves some precious vertical space on wide-screen laptops, which is also a good thing. MintMenu is an intuitive, advanced, well organized, feature-rich and easy to use main menu, and you'll never go back once you've tried it  (originally forked from SLAB, the Gnome main menu developed by Novell for Suse Linux Enterprise Desktop). As you can see, I have added a few items to the taskbar, such as "language indicator", "force quit", "tomboy notes", "system monitor", etc. I also removed the window list, since it is embedded in… what comes next:

Now, I do like how streamlined and smooth Linux Mint is, but I also I like my desktop to be just a little bit fancy, so I can't go without Cairo-Dock!! Cairo-Dock, or GLX-Dock, is the king of Linux docks. It started out along with all other similar projects in Linux, which imitated the functionality of… yes, the Mac OS X Dock! And why not? Imitation is the sincerest form of flattery! However, this one really surpassed them all, but that's just my own humble opinion.

So, we want both Mint's taskbar and GLX-Dock, together. GLX-Dock will not waste vertical space, since it auto-hides itself if the active window overlaps it. In the screenshot above, you see the Mint main taskbar on top and GLX-Dock on the bottom.

Right click on Mint taskbar, hit "properties" and change its position to "top". That was easy.

Now, you can go to the GLX-Dock installation instructions page, on which you will also find some very helpful usage advice. You can spend hours and hours of experimentation and joy, fine tuning GLX-Dock and its plugins, themes and modules, using the very helpful in-line instructions. However, as I have come to realize, the standard setup is just fine. So, you can just follow the instructions to install it from the package manager, and you're good to go!

However, if you are, as I am, an upgrade freak, you can use the weekly repository, which is quite stable, but still cutting edge, so beware (use the instructions for Ubuntu and mind the note for Linux Mint).

Linux Mint 10, codenamed Julia is out. Mint continues to be my favorite distribution and Julia has been improved quite a lot. So, the post still holds true.!

Explorer.exe — No such interface supported